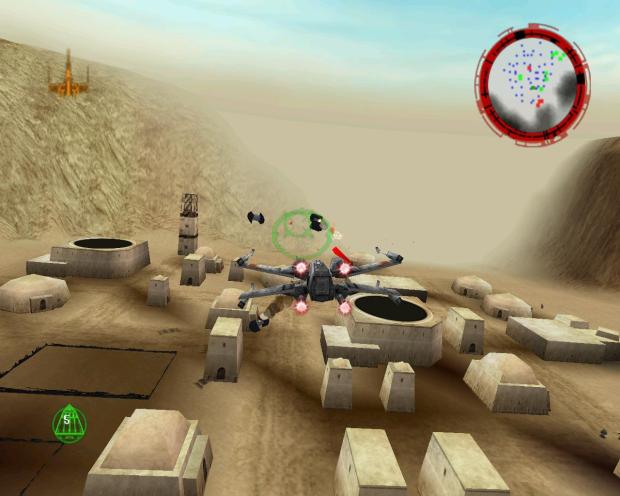 While X-Wing Alliance was the last game in a series of serious space combat simulators for PC, Rogue Squadron is an arcade shooter developed largely with the Nintendo 64 in mind, though it was released for the PC at the same time. Instead of worrying about how your ship’s power systems are distributed between your lasers, shields, and engines while issuing orders to your wingmates to take down Imperial targets like you do in X-Wing Alliance, Rogue Squadron has you just shooting down enemy targets while giving you three lives to work with as well as hidden power-ups to collect over the course of 16 missions.

It’s not really even fair to compare the two games because of how different they are. X-Wing Alliance was complicated enough that almost every key on a PC keyboard did something whereas Rogue Squadron was clearly meant for an N64 controller. The result is a much more pick-up-and-play experience where you actually get to play as Luke Skywalker as he leads an elite group of Rebel pilots in a (alas now non-cannon) timeframe set between Star Wars and The Empire Strikes Back.

Every mission in Rogue Squadron is set on a planet’s surface, and they have a nice variety. Missions can have you do anything from escorting a group of ground vehicles as they take fire from AT-ST walkers to leading a bombing assault on an Imperial base hidden in canyons. At your disposal, you also have the usual X-Wings, Y-Wings, and A-Wings to get missions done, though you don’t get to choose which one on your initial playthrough, and that makes sense since each craft is better suited to a certain role. The Y-Wing is equipped with proton bombs and a reinforced hull, making it ideal for bombing runs, while the A-Wing’s nimbleness makes it better suited to shooting down TIE Interceptors. Of course, the X-Wing is kind of good at everything, but as good as a Y-Wing or A-Wing in specialized tasks.

Certain missions have you flying a snowspeeder. If that is the case, then you will know you will have at least a couple AT-ATs you need to trip with your tow cable.

The game’s graphics and sound are what make it most obviously really an N64 game, which takes into account some glaring limitations of the N64 hardware. Rogue Squadron was one of the first games to take advantage of the N64’s expansion pack, allowing for higher resolutions. That resulted in it being one of the best-looking games to have come out for the N64, but PC reviewers were less impressed. On one hand, players will appreciate how beautifully detailed the ship models are, with a detailed R2 unit and nice engine effects on the X-Wing. On the other, you will also see the painfully short draw distance characteristic of N64 games as if there is always some sort of fog just a short distance ahead of you just obscuring what’s in front while the same fog engulfs whatever you leave behind. X-Wing Alliance, despite having many more objects onscreen at once and coming out a year later, had more detailed craft (where the R2 unit on X-Wings had rotating heads!) and never had an issue with draw distance.

Similarly, Rogue Squadron is impressive in its sound design considering it’s an N64 game. It has an unusually large amount of voice-acted dialogue. One area the PlayStation dominated the Nintendo 64 was the fact that PlayStation CD-ROMs had more capacity for sound data than N64 cartridges did. Consequently, it was normal for games like Metal Gear Solid to have entire narratives with full voice acting, whilst Legend of Zelda: Ocarina of Time had a novel’s worth of story all told through onscreen text. Despite that, Jedi Knight came out before Rogue Squadron and X-Wing Alliance came out after, and both games had significantly more voice acting than Rogue Squadron did. Likewise, Rogue Squadon’s soundtrack was almost entirely MIDI, most of which original tunes with John Williams Star Wars music being secondary, again a result of the lack of capacity for sound data on N64 cartridges. I will say this did lead to the Rogue Squadron theme, which I find to be quite catchy.

Overall, it’s actually quite unfair to really grade Rogue Squadron’s technical aspects as it was really developed to be an N64 game. I felt like the N64 was a system that could make better graphics than the PlayStation could, while PlayStation CDs allowed for PlayStation games to have better sound than N64 games. Despite that, PC games from that era were able to have great sound and graphics.

I replayed the game using the same joystick I used to play X-Wing Alliance. The first time I played Rogue Squadron, I just used the keyboard controls, and I will definitely say a joystick used in conjunction with the keyboard, especially when wrapping a tow cable around an AT-AT’s legs, makes the game far more playable. Once again, this game was meant for an N64 analog stick.

Overall, this game took me about 5 hours to complete. Missions award you medals depending on your performance, where the game grades on things like your shot accuracy, how many enemies you killed, and how long you took to complete the mission. These medals result in unlockable content like missions and new ships to fly, so they do add some replayability to extend the length of the game. Despite that, it doesn’t hold a candle to X-Wing Alliance needing 31 hours for me to beat.

That said, as I said before, Rogue Squadron is definitely meant for a different crowd than X-Wing Alliance. If you really want a deep, serious space combat simulation, you should stick with X-Wing Alliance. If you want a fun shooter that is easy to pick up and play, then you should play Rogue Squadron. I said some critical things of Rogue Squadron in this review, but I also want to say that it’s still an extremely fun game to play and I would definitely suggest picking up a copy now that you can get it from Steam for pretty cheap.