Guardians of the Galaxy (2014) [Second Opinion] 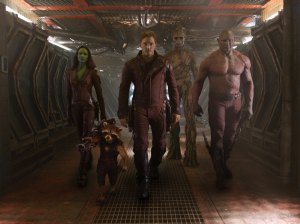 And now I’ve finally seen the movie everyone is talking about: Guardians of the Galaxy, and I offer a second opinion of this movie on this blog, the first being here.

Guardians of the Galaxy follows a thief, an assassin, two bounty hunters, and a convict as they find themselves responsible for saving all life in the galaxy.

Considering it’s a movie with a  finite runtime, I was impressed by how much loving attention the writers gave to developing the universe in which the movie took place. The central conflict seemed oddly allegorical of the current crises we have in the Middle East. The outpost Nowhere felt like a living, breathing place.

Every character had a complete backstory. And I do mean every character. We have Peter Quill (Chris Pratt), our main character, who was a human from Earth abducted by Ravagers led by Yondu (played excellently by Michael Rooker here), and he grew up to be the most infamous outlaw in the galaxy. We also have a slave girl, who with one action and one line of dialogue, told us everything about her.

Guardians of the Galaxy exhibited a love of pop culture. It made references to classic rock music (Quill carried a cassette labeled “Awesome Mix Vol. 1”, which contained his mother’s favorite music from the 60s and 70s), movies, and even to itself, often leading to humorous results.

In case you haven’t figured it out by now, Guardians of the Galaxy was the most well-written movie I’ve seen this summer.

For exactly that reason, I will say Guardians of the Galaxy is the best movie I have seen this summer, finally topping Edge of Tomorrow. It had plenty of style, namely in the special effects, the acting, and Zoe Saldana once again being an alien and looking damn good doing it. The movie knew exactly when and when not to take itself seriously, striking a great balance between drama and comedy. The movie’s writing was the substance to back the style up.