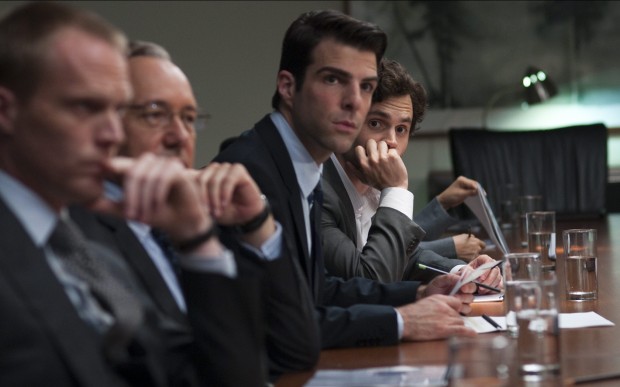 Margin Call follows a fictional investment bank, which is in fact a thinly-disguised Lehman Brothers, as they fight to survive by flooding the market with a ton of worthless assets they had in their possession, and thus wound up crashing the economy.

As my trade is in fact engineering, my knowledge of how the world of finance works is absolutely nonexistent. With that in mind, I did appreciate that Margin Call was less concerned with the technicalities, and when it did have to delve into them, it did dumb it down enough so I could understand it.

Margin Call ultimately was a movie about the people involved with the crash. We get to see examples of investment bank employees (I don’t care what you say, I refuse to call them “bankers”) from the CEO all the way down to an analyst who was recently hired from college. Early on, we see this same analyst (Penn Badgley), along with a few of his colleagues, party it up in a bar late in a late night of excess as they remain blissfully unaware of the fate that awaits their company. He even admitted to having made a quarter million dollars without really having a clue what he was doing. We see a manager (Kevin Spacey) as he deals with the crisis facing his company, all while knowing his pet dog was about to die.

In general, Margin Call was one of the most well-acted movies I’ve seen in a while. While it was rather hammy, Jeremy Irons, as CEO John Tuld (Yes, he was named after real Lehman CEO Dick Fuld. At this point, you’re supposed to laugh with me.), gave a terrific performance. Kevin Spacey is one of my favorite actors in general, and he did not disappoint here.

The acting also helped bring about the personalities of the characters. Margin Call didn’t really have a story as much as it chronicled a really stressful 24 hours. Without a real story to fall back on, Margin Call used the strength of its characters to keep itself engaging and negated my point in my review of The Fault in Our Stars where I said I thought American filmmakers don’t know how to make movies without stories.

The cinematography was absolutely gorgeous. Most of the movie took place in the rather claustrophobic confines of this office, and it looked great. I think that is enough to warrant buying this movie on Blu-Ray.

Overall, I would say Margin Call is a really good movie about some really bad people. It is the first movie I’ve ever seen about financial services, but I will say it left a good impression on me.