5 Great Movies to See (by yourself) on Valentine’s Day

Ah yes, Valentine’s Day. The greatest day in the calendar year for chocolate and card companies. Needless to say, however, some of us are single. Still, that shouldn’t stop you from having some Singles’ Awareness Day fun! Not having someone to date means you have more time to check out some awesome (non-chick flick) movies! These are what I have to recommend.

As I said in my original review, The Avengers was exactly the movie I needed to get Twilight out of my system. Twilight was a movie (and book) where the main message was how important it is that, even if you’re an annoying high school necrophile, you have a “beautiful” boyfriend. The Avengers on the other hand, was almost devoid of romance. Sure, Tony Stark (Robert Downey Jr.) had Pepper Potts (Gwyneth Paltrow) and there was a thing between Hawkeye (Jeremy Renner) and Black Widow (Scarlett Johansson). However, both relationships were so utterly unimportant to the movie, which was this massive, special effects-filled orgy of awesome action in what was basically a pure good-versus-evil story. I’m perfectly comfortable admitting that I like mindless action movies, and The Avengers (nominated for the 2013 Oscar for special effects no less) was probably the best one I have seen in the last year.

The Empire Strikes Back is generally agreed to be the best film in the Star Wars saga. It is a continuation of the classic good-versus-evil story started in Star Wars (1977, later known as A New Hope). It follows our Rebel heroes, Luke Skywalker (Hamill), Han Solo (Ford), and Princess Leia (Fisher) as they flee the Galactic Empire. Of course, Darth Vader (David Prowse/James Earl Jones), supreme commander of the Imperial fleet, doesn’t relent. Luke begins his training with Yoda (Frank Oz), and in the process learns about his own roots. I will say no more as I reiterate that there are people in America who actually have not seen The Empire Strikes Back. The Empire Strikes Back nabbed the 1982 Academy Award for special effects and featured what is possibly the single most shocking revelation in this history of cinema. 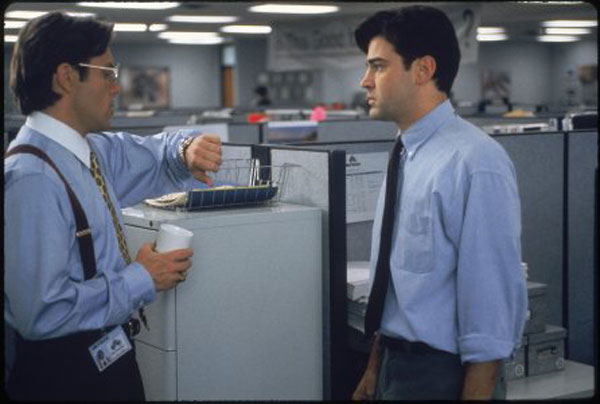 Office Space is the perfect movie to see for people who currently work or have worked office jobs. It follows Peter Gibbons (Livingston), a programmer who came to the realization that he is absolutely miserable at his job at a bureaucratic mess of a software company plagued by incompetent managers, and how he went about finding happiness in his existence. Office Space, despite having a less-than-impressive run in theaters (it barely broke even at box offices), is a movie that I believe to be one of the best comedies to have been made in the last 15 years. Mike Judge, known for animation like Beavis and Butthead and King of the Hill, showed himself to be more than competent with directing a live-action film. The movie features witty writing with many a quotable line.

Reservoir Dogs is Tarantino’s breakthrough film about a diamond heist gone horribly wrong. It featured a brilliant non-linear narrative as the dogs try to find out who amongst them informed the police. Non-linear storytelling and sharp dialogue both became mainstays of Tarantino’s movies. What is interesting is that while Tarantino is known for typically having very strong female characters (often with loving shots of their feet), Reservoir Dogs was almost entirely devoid of female characters. While still a violent movie, Reservoir Dogs is fascinating more as a result of the psychological toll resulting from the situation the lead characters are in.

As our loyal fans know, 2046 was what I identified as the best Asian film I had seen in the year 2012. Wong Kar Wai’s movies are real treats for the senses with his visual style. 2046 follows Chow (Leung) as he moves into hotel room 2046 in order to write and to try to get over his frustration of having been unable to consummate his relationship when he was In the Mood for Love. Chow’s behavior gets more self-destructive with each passing day. He sleeps with a different woman almost every night and gambles his assets away. He thinks he is filling a void in himself that was left open by Su Li Zhen (Maggie Cheung). Besides being an awesome movie with a moving story and awesome visuals, why else is this movie great for Valentine’s Day? It shows romance is overrated as hell anyway.