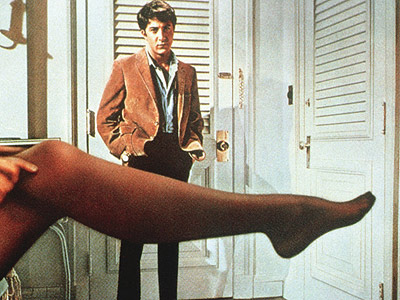 It’s always awkward when a woman old enough to be your mother seduces you.

Bad Pop Culture Historian, bad! You missed out on one of the most iconic movies of the 1960s up until now!

Dustin Hoffman stars as Ben, the titular Graduate who has no direction in life. Almost immediately upon returning home from college, Ben finds himself getting the attention of family friend Mrs. Robinson (Anne Bancroft), and he enjoys it until he considers the possibility he may be in love with Mrs. Robinson’s daughter Elaine (Katherine Ross).

It is fair to say The Graduate is one of the most carefully constructed movies I have seen in a while (granted, I saw the haphazardly made Finders Keepers (2012) recently). After debarking the plane that brought him home, Ben is on a moving walkway in the airport. The camera is positioned such that the viewer (like Ben) can’t see anything beyond what is immediately in front of him. We see brief shots of what Ben focuses on while resisting Mrs. Robinson’s temptations in their first encounter in the movie. Anything that was placed in any shot or sequence in the movie was not done so by accident. It’s clear that everything in every frame had a specific reason to be there.

The Graduate featured a terrific ensemble performance. Dustin Hoffman was very lovably awkward as Ben. While Anne Bancroft (who was actually only 6 years older than Hoffman) was almost terrifying as the manipulative Mrs. Robinson, it is quite clear why The Graduate was the movie that really helped propel Hoffman to stardom.

Needless to say, the Simon and Garfunkel soundtrack was absolutely amazing. The Graduate succeeded in using Simon and Garfunkel songs so complement the visuals very nicely (the scene I mentioned with Ben on the walkway featured Sounds of Silence) rather than being just a vehicle for the duo to release a soundtrack album (which they inevitably did of course). Very much like the cinematography and the mise-en-scene, every song had a very specific purpose for the scene, with the most obvious being the use of the song Scarborough Fair.

If I had to find a problem with The Graduate, it would be that the movie was a little bit light on plot overall. I don’t think it was really a bad thing as the movie clearly wanted you to be more concerned with the “here and now” of each scene than with the bigger picture; of course there were important details like Ben picking up a smoking habit.

Still, I can see why The Graduate nabbed 6 Oscar nominations plus a win for director Mike Nichols. The shear meticulousness on the part of the filmmakers resulted in what is considered a classic from the latter half of the twentieth century. The Graduate is simply the best movie I have seen in a while. If you have yet to see The Graduate, you absolutely have to.