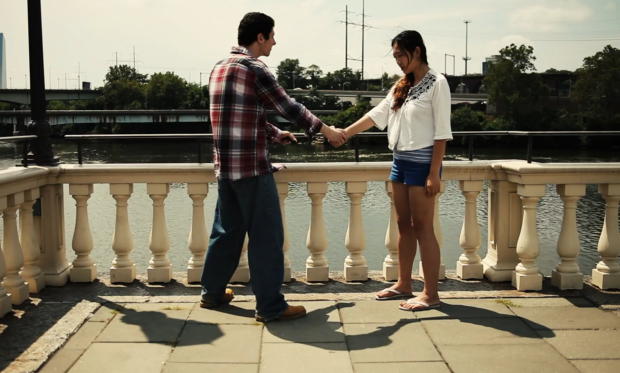 Teleporting on a nice day.

It’s just another day for Rob (Matt Hubsher) until he finds a lighter on the ground. While attempting to light a cigarette with that, he finds himself teleported to the apartment of Shelley (Kara Zhang).

Finders Keepers is a 6-minute long short film from the Philadelphia indie film scene written and directed by Matt Mangigian.

I want to start by saying the movie’s cinematography was absolutely gorgeous. Mangigian’s use of light and shadow worked very well and overall the movie was very visually appealing.

The trouble came with the actual execution of the story. Much of the movie was about the philosophy of having this magic lighter in your possession and the possible ethical ramifications it could have. The problem I had was that I found myself not really caring if Rob decided to keep or throw away the lighter. He didn’t seem to run into anything that could be remotely construed as an ethical dilemma; asking Shelley out to dinner seemed to be the most difficult task he was faced with. I also wasn’t happy with how the dialogue was written. Neither Hubsher nor Zhang really seemed to believe what they were saying, and I thought Hubsher wasn’t trying very hard to improve what he was given to read.

Another thing I found really problematic was the sound recording and editing. An early scene took place in Shelley’s apartment, and the dialogue echoed all over the place. There were times it seemed like the crew’s boom mic just wasn’t picking the lines up as it should, and there was a scene where the background music was drowning out the spoken dialogue.

Having seen some more of Mangigian’s portfolio, I definitely see that he has a promising career as a cinematographer ahead of him. However, he has no business writing scripts and should probably steer clear from the sound recording process. As much of a fan of Miss Zhang as I am, I will say this is the worst movie I have seen that featured her.