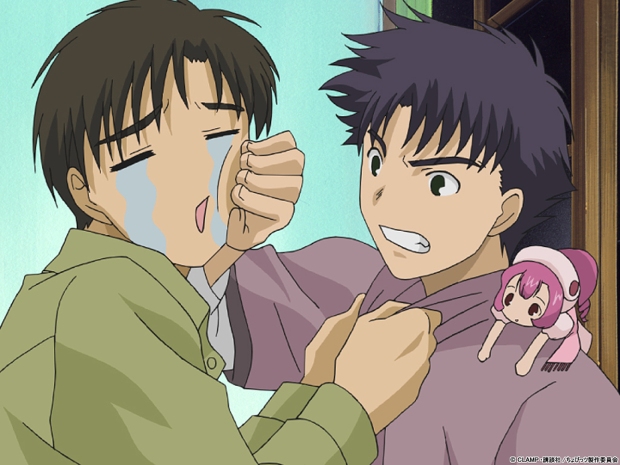 Can you believe it? A screenshot of Chobits where Chii is nowhere to be seen!

Ok, I’ll admit that I’m not really one for the shounen romantic comedy genre of anime. It was upon hearing Tanaka Rie’s “Ningyo Hime”, the second ending theme of the series, that I decided to give this one a go.

Chobits takes place in an alternate future where computers look more like women than the thing I’m currently typing this review on, and it follows Motosuwa Hideki, a student who moved to the city from rural Japan in order to attend prep school for university entrance exams. Shortly after moving into his new apartment, Hideki finds a PC in the trash. Since he doesn’t have one of his own, Hideki decides to take the PC back to his apartment only to find it unable to do anything besides say “Chii”. Thus begins Hideki’s task of teaching Chii, as she came to be known, everything.

Chobits’ beautiful promotional artwork is all over the place, and the DVD cases were treats to look at. I’ll admit I was already a tad disappointed in the presentation when I started watching the first episode. At best, Chobits looked about as good as other anime series of 2002, with some clear cost-cutting shortcuts, like in an early instance of Hideki looking for something in his boxes. In that shot, you see him just tossing nothing into the air while he jumps about his room and repeats an arm motion. Overall, the series was full of beautiful character designs (especially Chii, ok Hideki not so much), but pretty artwork does not equate to quality animation.

Still, I’m not about to dock an anime series points just because of its look. So what else was the problem?

The story was very problematic for much of the series. I haven’t read the manga, but I know the manga and anime had their differences, the most key one being that the manga was largely from Chii’s perspective while the anime was very much centered around Hideki. As a result, many early episodes were basically, “Chii does something funny” or “Chii does something cute”. That was all well and good, but I found myself losing patience because the characters (well aside from Chii) didn’t seem to be growing at all. A particularly irksome episode was when Chii was tasked with buying underwear for herself.

And speaking of characters, Hideki is really not about to win any sort of “Anime Lead of the Year” type award from me anytime soon largely because of his behavior for the first half of the series. He was dumb and perverted with the series hinting many times that he was a borderline porn addict. Onizuka from GTO was a dumb and perverted guy too, but he was a character I really loved watching. I guess Hideki was supposed to fit the “nice guy who can’t find a girlfriend” mold found in many similar anime rom-coms, but I had a hard time relating to him as he was much more pathetic than even the likes of Oh! My Goddess’ Keiichi.

Thankfully, Chobits began to improve after the halfway point when it took a more dramatic turn and started to abandon its former comedic nature. Even then, I found myself caring a lot more about the side characters than I did about Chii or Hideki. For the longest time, Chobits just dropped hints for Chii’s origins, but the story alluded to what made Chii so special so infrequently that I found myself just not giving a damn. Still, I did like seeing characters like Hideki’s prep school teacher (an attractive woman, go figure) and a baker get treated much more seriously. It also did help that the animation had gotten a huge shot in the arm and overall the series began to look a lot better.

Overall, Chobits’ best aspect was its sound. Besides the opening theme “Let Me Be with You”, the music stood out in a good way overall, and I really liked the performance Tanaka Rie (incidentally the voice talent behind Chii) gave for the ending themes “Raison d’être” and “Ningyo Hime”.

The seiyuu also left a very positive impression on me, which makes sense since the cast was largely composed of veterans who had some major role on their resume. Examples include Sugita Tomokazu (Sakata Gintoki in Gintama) as Hideki, Inoue Kikuko (Oh! My Goddess’ Belldandy) as landlady Hibiya, and Ueda Yuji (Sagara Sanosuke in Rurouni Kenshin) as Ueda. They worked very well with each other and at least let me walk away knowing that Chobits was a well-acted series.

Still, the issue was that Chobits gave me far too little, and far too late. It was a good thing that I was patient enough to keep going and get to the later episodes, but I think anyone else who was in my position would’ve dropped it after maybe 5 episodes. The worst part of Chobits is that somewhere in there was a very good idea that could have led to a very good anime series, but it wound up being just another shounen romantic comedy series, and the early 2000s was by no means short of that.

NOTE: A pun that got lost (added?) in translation is what PCs are called in the series. In Japanese, “personal computer” is simply the loanword paasonaru konpyuutaa, which is often shortened to “pasokon”. Thus, in the Japanese version of Chobits, the characters were using exactly the same word to describe a PC shaped like a woman as they would to describe my Dell laptop. However, the English dub (and subs) tried to compensate for it by giving a literal translation of “persocom”, which I think was unnecessary.

One thought on “Chobits”