Once upon a time, when anime was first making its way to the West, American licensing companies felt it was necessary to alter them to make it easier for American audiences to digest. For that reason, anime series were very frequently recut to tell completely different stories and featured completely different music.

What started my thinking about this was my starting on the classic anime series Super Dimension Fortress Macross; you probably remember it as being the first third of Robotech. Robotech was actually 3 completely unrelated anime series combined to tell one narrative. The reason Carl Macek had to combine series was because Macross was not long enough for American broadcasters to air it. Needless to say, Macek went about massively altering the different series so it seems like they were all telling one, really long story about the Robotech Wars. As far as the music goes, you can compare the opening sequences for the original Macross series and the Macross portion of Robotech.

The general feeling I got with the original opening as Hikaru preps for takeoff is how he was an unassuming hero forced into a conflict much larger than himself. As a result, the vibe I got from the Japanese opening was that Hikaru was thinking, “Ok, this is gonna suck big time, but I have to do what I have to do.”

You’ll notice that for the most part, the animated sequence in the opening of Robotech is identical to what you see in the Japanese version, aside from the English titles and the music. However, the music in general gave the opening (at least to me) a feeling of Rick Hunter (as Hikaru was known in Robotech) just getting ready to kick some Zentraedi ass.

Pleased to meet you. I’m Ichijyo Hikaru. But you probably know me as Rick Hunter.

Admittedly, as far as stories go, Macross was largely kept intact albeit with changed names and some of the more objectionable scenes toned down (such as Minmei explaining in the second episode that she values her hair more than her life or when Roy Focker shoots a Zentraedi soldier at point blank range). I was impressed that they kept Rick’s/Hikaru’s uneasiness when it came down to actually killing Zentraedi, as shown in a key scene at the end of episode 6. Still, Macek is often cited by anime purists as someone who belongs to rot in hell for his edits to Macross, but I feel like he was nowhere near the worst offender (Ok, maybe he was, but for what he did to Nausicaa of the Valley of the Wind, and not to Macross. Yes, he was the man who brought us Warriors of the Wind, and yes he was the man who almost convinced Miyazaki Hayao to stop selling his movies to American distributors.).

My favorite example is actually Gatchaman as far as anime butcher jobs went. Kagaku Ninja-tai Gatchaman was a superhero anime series created by Tatsunoko Studio’s own Yoshida Tatsuo, the same man who brought as Mahha Go Go Go (aka Speed Racer). Gatchaman followed the Science Ninja Team as they took on crime syndicate Galactor to thwart their plans to take over the world.

When Gatchaman first came to America, it was known as Battle of the Planets. Sandy Frank completely recut the series so it told a story of 5 people taking on alien robots and even went so far as to animate more scenes including the annoying robot 7-Zark-7 and stock footage of the God Phoenix (or Phoenix as it was known in BotP) flying through space. Of course, there was the issue that despite many of the episodes allegedly taking place on other planets, they looked very suspiciously Earth-like. 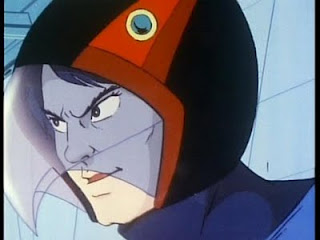 Of course, the reason extra scenes needed to be added was, in addition to helping streamline Frank’s new story, to make up for the shear amount of each episode that was getting hacked off so the show could be aired on television networks for children to see. In addition to the usual (for its time) graphic violence and profanity, Gatchaman featured things like suicide and transgenderism (the main villain could change his/her sex at will). Given the fact that gay marriage is still a controversial issue in America in 2012, I’m sure you can imagine how parents of the 1980s would have felt about their kids seeing Berg Katse’s ability to be a woman when the situation called for it.

Ultimately, the issue with Battle of the Planets was that Sandy Frank was unable to actually end the show, mainly because the last few episodes of Gatchaman were easily the most brutal of what the show had to offer (most notably in the death of one of the Science Ninja Team’s own). Thus, Battle of the Planets wound up sort of remaining incomplete in its story.

Gatchaman’s localization story was far from over though. In the late 80s, Ted Turner picked the show up and called it G-Force. G-Force was an adaptation of Gatchaman that was much closer to the original Japanese, but was unfortunately hampered by budgetary constraints that didn’t plague Sandy Frank. As a result, G-Force featured uninspired English voice-acting and a really annoying synth tune that played whenever there was no other music; the rest of the soundtrack, fortunately was preserved from the original Japanese show. However, Turner also had the issue of the last few episodes being too hot for American childrens’ TV, and thus sort of left the show unresolved.

The sad truth is that while distributors often hacked anime to bits before showing them to American audiences, anime probably would never have made it to the west had efforts not been taken to sort of make it easier for Americans to digest something that was imported from Japan. Shows like Battle of the Planets and Robotech proved to be immensely popular in America, despite having things like corny new music or laughably bad English voice-acting. Robotech especially gave many cartoon viewers something they never had before: A drama with a continuous story that spanned a whole series instead of a bunch of self-contained episodic plots. Hell, G-Force was the anime that got me into anime when I was but a wee lad of 3! (I laugh at you fools who didn’t get started until Pokemon came along!)

So while the Japanese vision for these shows very frequently got lost in translation, they were good enough for the masses, myself included. And they did serve to boost the popularity of Japanese animation in the west in the long run.