Having started it in February, I finally completed Mass Effect 2 today, and just in time for Mass Effect 3. I have to say it was a hell of a game.

As the original Mass Effect was never released for the PS3, I never got to play that. However, the PS3 version of Mass Effect 2 started with an interactive comic book that served both to bring new players up to speed as well as give them a chance to make some of the pivotal moral decisions from the first game. In the Mass Effect games, you play as Commander Shepard a man or woman that you can customize to your liking in his/her appearance and his/her character class. In the PC and Xbox360 versions of the game, you could import your character from Mass Effect 1 whereas PS3 users are forced to start from scratch. In ME2, you continue Shepard’s struggle against the Reapers, a massive force waging war against humanity.

As far as gameplay, Mass Effect 2 can be most accurately described as an action-adventure game with RPG elements to it. Your ship, the Normandy, serves as Mass Effect 2’s central hub. From there, you can travel to planets in the Milky Way. Some planets also serve as sub-hubs where you can do things such as shopping and accepting missions. Other than that, you cannot land on most planets unless a mission calls for you going there; you are limited to collecting minerals that you use for upgrades.

Most missions follow a fairly similar structure. They usually involve Shepard and two squadmates going into a dungeon and either finding something or fighting a boss. There is a lot of variation in mission style as there are more than a few that involve no combat at all.

Speaking of combat, ME2 plays like a third-person shooter. Instead of bullets, your weapons use ammunition coming from thermal clips, or blocks of metal that shave enough off for a shot to be fired from your gun. While it’s an interesting idea, your guns handle almost exactly like they do in any other shooter. In addition, you and your squadmates have tech (think weapon-based) and biotic (like spells) powers that you can use. As my Shepard was an Infiltrator, my favorite power was Incineration. It starts off as a conventional fireball, but when you max the power out, you can choose to either make it a stronger fireball or one with an area effect, of which I opted for the latter. 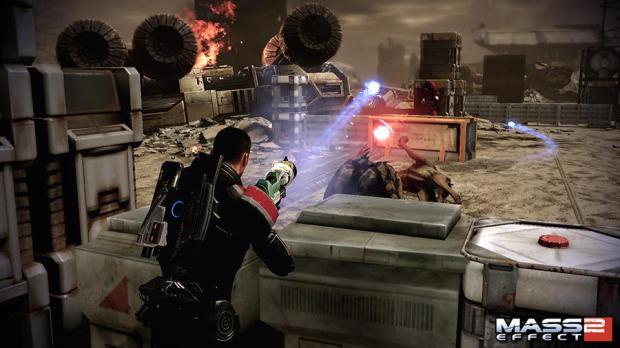 As far as the RPG portion of the game, you gain experience by completing missions. It makes sense that you don’t get experience points by killing enemies as most encounters are scripted and chances are you will need to eliminate every one you encounter. When you level up, Shepard and his squadmates are awarded points that they can use to upgrade their powers.

The meat of Mass Effect 2, at least I thought, was more in the adventure part of the game than the action. You will spend a very significant portion of the game simply talking to other characters. You will almost always be confronted with dialogue options. Sometimes, one choice will award you Paragon while another would give you Renegade points; it’s best to think of them as good and bad karma type choices. While the combat was fun, I will say that I found character interactions a lot more satisfying.

A quieter moment in Mass Effect 2.

The reason I wasn’t totally in love with the combat was because I did feel like I was I did feel like I was fighting the controls on occasion. This was more true when it came to finding cover. You tap ‘X’ to get Shepard behind cover. I frequently found myself either not getting behind cover or Shepard standing up when he wasn’t supposed to. The actual shooting mechanic worked as it should have, but I would have liked a more streamlined cover system.

However, Mass Effect 2 succeeded in totally immersing me in its universe. While Mass Effect 2 had a main story, there are all sorts of side quests you can embark on. Many of them come from teammates that come to you for help with a personal problem of theirs. Through many quests, you see to what extent Bioware went to create a living, breathing universe, complete with politics. A common theme you will run into is interracial tension between humans and various alien species.

It also helps that many moral choices you have to make don’t seem very obvious as to what is the right thing to do. For example, in one mission, you have to choose between saving workers in a burning factory, or helping one of your teammates exact revenge on the man who tried (and failed) to kill him many years earlier. Other games like Infamous and Fallout 3 made it pretty obvious what would be good and bad choices, but Mass Effect 2 generally offered more realistic moral dilemmas.

Mass Effect 2 also featured some absolutely delicious graphics. While there were some texturing issues here and there, what I praise this game for is the shear detail put into the facial expressions of characters. Ironically, it’s Shepard who looked the least impressive because his (or her) appearance is decided by the player. Add some terrific voice acting all around, and you have truly believable characters.

Unfortunately, the game is marred by some technical issues in the presentation. I have seen on more than one occasion, the sound effects in cutscenes don’t synch up to the video. There were also slight (very slight) graphics issues of textures not loading in properly.

Also, there were some bits of gameplay that were really boring. I mentioned earlier that you need to collect minerals for researching upgrades. That is one tedious process that you will have to spend many hours doing if you want to keep your team’s equipment up to par. Other than that, I thought the Overlord bonus mission was a pretty weak addition to the game. You spend much of the time driving around in a tank, which was absolutely no fun to control partly because I found myself clipping through level geometry a good portion of the time.

Nonetheless, I think Mass Effect 2 did two things very effectively: It created a very tightly constructed universe for you to interact with and it did a decent job of genre melding (action, adventure, and RPG). While it’s definitely not a hardcore RPG like Skyrim or a hardcore shooter like Modern Warfare 3, Mass Effect 2 succeeds in being a great middle ground, despite some slight shortcomings.