Comedies: From Silents to Talkies

The year 1927 saw the release of The Jazz Singer, the first movie to be a talkie. Since then, movies started making the transition from silent to talkie.

The roaring 20s had silent star comedians like Charlie Chaplin, Harold Lloyd, and Buster Keaton to name a few. The unfortunate thing was that Chaplin represented a minority of stars that went to make successful talkies while most of his peers faded from view in Hollywood.

Harold Lloyd was a good example of the silent era, perhaps even more so than Chaplin. Lloyd’s comedy style was very visual; scenes like using a bald man’s head as a mirror in Safety Last (1923) and the destruction of his suit in The Freshman (1925) come to mind. Lloyd’s first talkie was Welcome Danger (1929).

If you were to watch Welcome Danger, you would notice the speech and the lip flaps don’t really quite line up. That was because the film originally was supposed to be silent, so sound wasn’t recorded initially until Lloyd made the last-second decision to dub sound in. That attracted many people, mainly because they were really curious as to what Harold Lloyd’s voice sounded like. What they discovered was that he had a rather annoying nasal twang. Thus, while Welcome Danger was a financial success, it was one film that has largely been forgotten about in movie history mainly due to the weakness of the comedy relative to Lloyd’s silent films that came before it.

Other talkies included Feet First (1930), which was basically a talkie rehash of Safety Last because a huge part of the movie was a remake of the skyscraper climb. As Lloyd himself was getting older, he finally sold his studio in 1937 and retired from moviemaking in 1944. 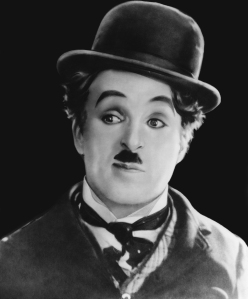 On the other hand, Charlie Chaplin very strongly resisted talkies. The 1920s saw films like the classic The Gold Rush (1925) and The Kid (1921). Unlike Harold Lloyd, however, Chaplin continued to make silent films well into the 30s, such as the classic tearjerker City Lights (1930) and a portrayal of the realities of the Depression in Modern Times (1936). It’s fair to call Modern Times a semi-talkie because while much of it was silent, the movie featured sound effects and spoken dialogue used for comedic effect. Chaplin even sang a song at the end of the film!

Chaplin’s first true talkie was The Great Dictator (1940) in which he was Adenoid Hynkel (in addition to a Jewish barber in a double role) which was a thinly veiled caricature of Adolf Hitler. Chaplin admitted that had he known the true extent (which no one did until Allied troops discovered concentration camps late in the war) of the Holocaust, he would not have made the movie. After this movie, Chaplin released a number of other films like Monsieur Verdoux (1947). He also re-released The Gold Rush in 1942, featuring a new musical score (In the silent era, filmmakers just trusted the person playing the pianos in the theaters to find appropriate music to play during the movies) and a narration.

In my opinion, Chaplin’s best movie was a talkie in fact. That movie was Limelight (1952). In that movie, Chaplin plays a has-been clown helping launch the career of a suicidal ballerina (Claire Bloom). The ending, the first time I ever cried at a movie, was pure genius, even beating that of City Lights.

While many silent stars faded in the 1930s, there also was the emergence of other famous comedians, such as The Three Stooges and The Marx Brothers, who added their own blends of comedy. Both the Stooges and the Marxes balanced visual humor with the verbal, and arguably, they did it more successfully than Harold Lloyd did in his talkies. 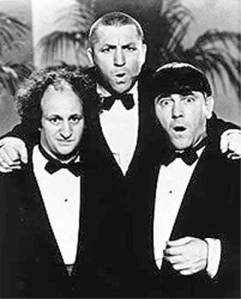 The Stooges specialized in short films while the Marxes generally made features. As a result, the Stooges wound up having cranked out a huge volume of short films (their story is an interesting one, but that belongs in a post all to itself) through the Depression, through World War II, the post-war era, and finally into the early 1950s when they finally lost the backing of Columbia, and that was when they started making really forgettable feature films, including the absolutely awful Snow White and the Three Stooges (1959).

Conversely, the Marxes era was a short, but sweet one. They made classics like Horse Feathers (1932) and Duck Soup (1933) before retiring from the screen in 1941.

Some argue movies lost something when they became talkies, despite gaining sound. It could be that directors were allowed to be lazier with what they had to communicate visually because they could use sound to do the same thing. What do you think? Feel free to discuss in the commentary.

2 thoughts on “Comedies: From Silents to Talkies”